Down but not out: the joys of rolling

Staring between the ears of an Appaloosa named Queenie, while riding through a conservation park in Saskatchewan, I’m listening to stories about horses spooked by oddities in the woods (like wild bison) when my own horse stomps the ground in front of us, possibly stumbling.
“Watch your footing I warn her.” But too little too late. Her right shoulder heads for the ground, mine nearly hits the grass, and the next thing I know I’m scampering out from under a rolling horse that didn’t trip in the sand pit, but got excited by it. I pull my leg from under her in time and scramble out of what looks like a golf sand trap in the middle of the trail. Within seconds, another horse gets the same idea, and that rider dismounts gracelessly with a startled scream.
Everyone’s ok. Saddles are a bit askew and that’s when we decide to head back to camp after extending our two-hour ride another 45 minutes. 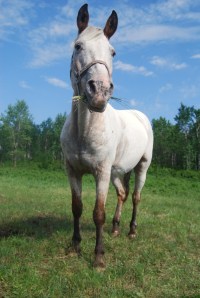 Horses will roll in sand and mud, but not often with riders on them. When they do, in my opinion, you should dismount fast (rather than argue with the beast) and scramble out from under the horse as quickly as possible because you don’t want several tones of animal pinning your leg or ankle. The saddle might survive or get damaged, but it’s your limbs you want safe.
One reason horses roll – at least in this case – is bugs. During this May trail ride (which involved overnight camping – more on that in a later post) through miles of conservation land accessible only by foot or horseback, we covered ourselves with bug spray. I’d suggestion you do the same for the horses. After this roll, Queenie did get a coating of repellant making the next day’s ride calmer. On any deep woods trail ride it’s worth inquiring about the fly spray policy before you leave the barn. Or in this case, trailer. Don’t get me wrong; the ride was the highlight of my prairie trip despite the unscheduled dismount.
Stay tuned for further details. (see July posting…. Horses, Flannel PJs and all the Bannock

The Truth About Puppies. Or What to Expect When You’re Expecting … a Puppy.

When you have a new puppy, walking from the bedroom to the bathroom is a challenge. With each step, a puppy bites at my slippers and jumps at my feet. She grabs at my jeans after I’m dressed, ripping holes in the denim (twice). Getting ready to take her out for morning pee is a game of keep-away with my snow boots, already sporting one chewed-off tie. Welcome to the truth about new puppies….