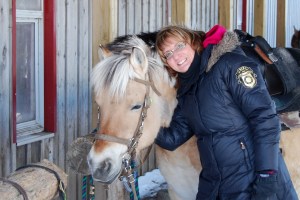 Me and Sandra Dee

Not many trail ride operators offer winter rides, and that’s looptoo bad because there’s two advantages to heading out into the sparkly snow: a one hour ride is long enough because toes start to freeze, and there’s no problem with your horse grabbing bites of grasses. Well, there’s almost no greenery around – my mount, the adorable roly poly looking Norwegian Fjord (my first) named Sandra Dee, still manages to grab at prickly evergreen trees within her reach, especially when heading toward home. 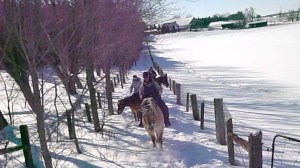 Apparently, we’re all ready for a little spring. But I’ve tried to make the best of this nasty winter by defeating crusty snow with horse hooves as much as possible, including a weekend in February at Conestogo River Horseback Adventures near Waterloo, Ontario. It’s understandable little Sandra Dee was getting hungry. This ride is as winter as it gets, trekking through belly-high snow drifts  – the deepest I’ve ever ridden through – for about a quarter of the route and everything is snow-covered. My pony is determined to glue her head to the hind end of the mare in front of us and step directly in her tracks.

Sandra Dee has clearly had her share of feed this winter, building up plenty of insulation against the record cold temperatures this season. Yet as third in line, she’s one of the most enthusiastic in the chain, though none holds a candle to the spirit of lead pony, Ariel. She’s followed by Brandy, the cutest combo of Fjord and possibly Quarter Horse (although guide Emma was told Arabian, which even she is skeptical about). Picture a Western horse with Norwegian colours streaked through her mane, and you’re looking an adorable mare who’s the envy of even the best hair salon colourist in town. Most trail horses here are less than ten years old, and there are a number of hardy Canadian Horses, the first time I’ve encountered that on a trail ride. Located in Ontario between Waterloo and St. Jacobs, Conestogo River Horseback Adventures is a well-kept photo-ready facility with indoor arena, several barns, paddocks, pens of goats, a few donkeys and one token llama. Also offered this time of year is the popular romantic winter sleigh ride. 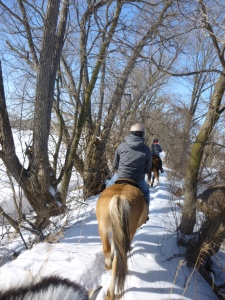 Through the woods and beyond

Winter trail riding, however, takes us off the property, between rows of trees arching like a canopy overhead, and around the edge of a neighbouring farmer’s field. (Although we experienced a strange moment of confrontation with the snowmobile-driving farmer who politely claimed we were trespassing …  so the route might get redrawn soon.) But today, we are allowed to continue, and later encountered a highlight: nesting bald eagles and other birds of prey swooping into the centre of the field we’re circling. Another horseback adventure offered here that you should consider are summer geocaching rides, which I’m looking forward to trying. These excursions head to St. Jacobs along the Conestogo River. St. Jacobs is a popular small-town tourist destination thanks to a visible traditional Mennonite community, a boutique-lined downtown street and a year-round Farmer’s Market that features a lot of Mennonite produce and merchandise. (So horses riding down the street will likely fit right in.) 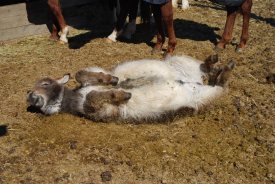 But today, the snowy route around a field and back again is not packed down by multiple daily rides, and as with most trail ride experiences, I returned to barn with a happy high and a hopeless crush on my noble little mount. This time, it’s a charming Fjord with a big belly and equally big determination to get through the deep snow that left her, and me, slightly winded. Bring on spring. It’s time. Checkout other winter riding adventures: Deerhurst and Fox’s Liar

← Magic Moment in the Sun
Washington D.C.: Smithsonian Fossil Horse. What if horses were the size of dogs? →

The Truth About Puppies. Or What to Expect When You’re Expecting … a Puppy.

When you have a new puppy, walking from the bedroom to the bathroom is a challenge. With each step, a puppy bites at my slippers and jumps at my feet. She grabs at my jeans after I’m dressed, ripping holes in the denim (twice). Getting ready to take her out for morning pee is a game of keep-away with my snow boots, already sporting one chewed-off tie. Welcome to the truth about new puppies….