Wisconsin fulfilled my dreams. Well, one dream: to ride a Paso Fino. Turns out, it was as smooth and comfortable as I imagined.

I believe these horses float.

Kurtz Corral in Sturgeon Bay, along the Door County peninsula is the scene of the gaited trot experience. Around for more than fifty-years, Kurtz Corral is a story of its own. A trail riding facility only (no boarding or lessons), the 54-year-old barn sitting on 140 acres of Door County forest and field is a third generation operation – current owner James Kurtz runs this place opened by his grandfather in 1960, on the homestead of James’ Great-grandfather.

No barn debris here – this property is uncluttered and well-kept. The check-in counter (they don’t take reservations) is front and centre with rows of cowboy boots lined up on a bench – no doubt for those outdoorsy vacationers who show up in sandals and summer wear.

Helmets are provided outside the video viewing room – yes, there’s an instructional video presenting the best advice I’ve seen on any trail ride (more on that in upcoming post). You can also book a short pre-ride lesson in the circular lunge arena – good idea for kids.

What’s the youngest age that can ride here?

My guide Kayla, who tells me she was first in a saddle at two-years-old, says: “If you can ride a bike without training wheels, you can ride here,” noting the youngest they’ve had riding was four, but she was already taking lessons.

Riding is a family lifestyle around here, even though Kurtz Corral is the only trail riding facility left in Door County. Kayla’s mother, who raises horses at a nearby farm, also worked here before her. 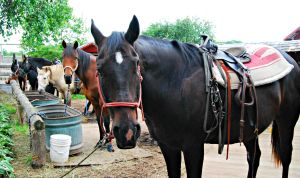 Remy greets guests at the door of Kurtz Corral, WI

The horses are also family and are clearly well cared for. Scooter, one of the owner’s first favourites, is a 25-year-old pony now used only for kids. A 36-year-old retired pasture pony hangs out with his friend in a similar situation, and Remy – the tall, dark and handsome Quarter Horse who greets you at the door – has only one eye after losing the other to cancer surgery.

Then there’s Winston – a nervous bucker who only my guide can handle … more about him soon.

The 43 horses here are ready to ride (well, most) and stand in a red barn enclosure, each name hanging on a painted plaque above each horse who wait for their turn out on the trails, two to four rides a day. You have your choice of walk, walk & trot, and walk, trot & canter for one or two hours across flat fields, through forest and passed the neighbour’s elk farm.

Once again, I’m on a private ride. Kurtz Corral doesn’t take reservations so drop by anytime during open hours year round and one of the usually five guides working during the summer will take you out.

Winston watches for Barry the dog

Speaking of favourites (and I did earlier), I’m riding 16-year-old Chica the owner’s current preference and she’s a steady calm Paso Fino with a relaxing trot that’s minimally different from a fast walk. Rumor has it Kurtz likes to ride her to the nearby winery, Simon Creek, with his Chihuahua tucked into a saddlebag. A trail ride to the winery and back is also an option for advanced riders here.

Riding towards the barn

Today we’re riding in the morning and a large group has already gone out ahead of us. Chica barely reacts to Winston’s antics as he spooks off the path several times and leads the trail with uncertainty. She does however compete with him at a trot overtaking him easily, likely because he’s not a comfortable leader preferring to walk beside side her rather than in front. Only when muddy Barry, the new barn dog, races out of the brush and across our path does she react along with him – but even then minimally.

As usual, our ride ends too soon as I watch the barn in the distance come closer over the flat ground. I want to load Chica into a trailer and take her home, but how often do I say that at the end of each ride? She’s a barn favourite and not going anywhere. But a Paso Fino is likely the trail horse of my future … distant future … because smooth pony trekking every day is another dream of mine. 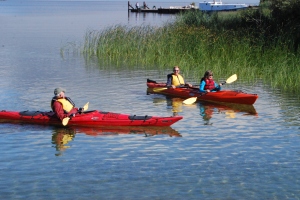 Travel Guide: Door County, Wisconsin is a peninsula on the east side of the state reaching north toward Michigan. Outdoor tourism is the number one industry in this region that’s adjacent to Green Bay and punctuated by smaller harbours around its coast.

You can hike in the Whitefish Dunes State Park and use the dog friendly beach; walk through The Ridges Sanctuary with two lighthouse range lights designed to guide boats into Bailey’s Harbor; and kayak, paddleboard and zipline at Rowley’s Bay across from the Rowley’s Bay Resort.

A former Chicago Fireboat in Sturgeon Bay takes people on daily tours through the canal that connects Green Bay to Lake Michigan, and there’s a Landmark Resort here so you rent a condominium with all the creature comforts of home. Kurtz Corral is about 15 minutes (drive, you’ll need a car here) from The Landmark Resort in Egg Harbor.

MORE: If you liked this, read about trail riding near Ottawa, Ontario here and relive my thrill of riding a Tennessee Walking Horse here.

STUFF: Get a travel guide to the Door County region here: Moon Wisconsin’s Door County. The Moon Handbooks are written by local travel writers, which makes them one of my favs.

And if I ever get a Paso Fino horse, this is what I’ll be wearing to every event I attend: Paso Fino pride. Check it out!

← Guest Post: Dublin Horse Show – Part 2 by Moira Duncan
Peterborough, Ontario: No Flies on me at the Lang Pioneer Village →

Dog-friendly Haunted Walking Tour Round Up!

Ghost Tours, Haunted Tours, or Spirited Walking Tours – the popularity of these guided walks throughout cities has grown and for one good reason: it’s a fun way to learn about the history, architecture and yes, even hauntings in whatever town you’re visiting. The second great reason? Many walking tours are pet friendly. Dogs especially […]