Indoor Eventing is one of those sports I’m not sure I love, but I can’t look away.

It’s horse show jump jacked up with speed, extra challenging jumps including platforms, hedges and weird shaped like triangles and pigs. Yes, one of the final jumps at the $20000 Horseware  Indoor Eventing Challenge at The Royal Agricultural Winter Fair 2017 was a big pink pig.

The event was first up at the evening RWF horse show November 4, 2017 in Toronto, Ontario, Canada prior to the Canadian Show Jumping Finals.

Unlike the sport’s show jumping cousin, Eventing is a little more rock and roll – literally. Rocking loud music plays, the audience is encouraged to cheer while horse and rider compete and commentators talk during the ride.

Courses are longer and jumps lower than show jumping, but are designed to mimic cross-country obstacles in the great out doors (like, pigs I guess). 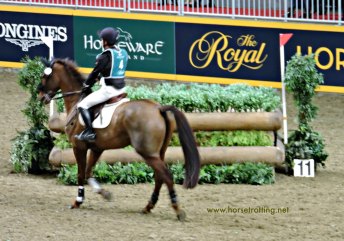 During Friday night’s RWF competition, ten riders took to the course for the second night in a row, carrying their faults forward from the Friday evening. Audiences watched two rounds on Saturday with riders jumping through the big red Canadian maple leaf twice in the second round.

So who took home the $6000 Indoor Eventing first place prize?

The 95th annual Royal Agricultural Winter Fair continues until November 12, 2017 at the Exhibition grounds in Toronto, Ontario. For almost a century, the fair has celebrated the country coming to the city … and more horses arriving at the facilities year-round indoor horse stables and riding arena.