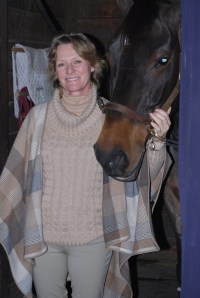 Some traditions are worth changing. Others, like the Royal Agricultural Winter Fair in Toronto, Ontario, should be a fall staple on any horse lover’s activity list. In its 92nd year (can’t wait for the big 100), the Royal is one of the largest indoor country fairs in the world. Not only is it full of vendor booths, food demonstrations, dog and animal shows, and livestock, the day and evening horse shows in the Ricoh Coliseum on the Exhibition grounds (where the Marlies play) is more than worth the (extra) price of admission.

Speaking of tradition, it’s been my tradition to attend the event with my friend and Ride with the Wind stable owner, Marie Christine, and a number of enthusiastic riding students from her barn. This year on November 8, rather than hang out after the horse show hoping to meet the winning riders (like we did last year), Marie arranged a meet and greet with one of Canada’s best show jumpers Beth Underhill, hours before Underhill participated in the Greenhawk Canadian Cup. Outside the stalls of her two horses, Underhill thoughtfully answered student questions as her two dogs, along with a canine friend, scampered around horses and people with ease.

Underhill started riding at the age of eight as one of the many extracurricular activities her mother insisted she participate in, including singing lessons. Horses, not music, stuck and she was jumping soon after she started, eventually participating in Canadian and international competitions (including the Olympics) for decades. Staying mounted, she says, for prestigious international competitions is difficult because of cost. “Once you get to a certain level,” she says, “all the riders are of equal ability and what makes the difference is the horse. Excellent quality jumpers cost about 3 to 5 million dollars.”

Europe, she says, is where most of the best horses are bred. (She prefers Dutch warm bloods). Countries such as Saudi Arabia and China getting into the sport are buying up good horses and driving up the price. Also, Europeans, she says, have the advantage of seeing and speculating on quality horses early. But Canadians have to go through agents and by that time the horse has already been identified and priced accordingly. “It’s a risky investment,” she adds.

Yet she enthusiastically encourages young riders: “go to horse shows,” she says. “Watch top riders, not just at the competition but behind the scenes. Observe how the warm up, and how they handle horses because all aspects are important.”

For us, our Royal evening culminated with four hours of horse show fun and demonstrations leading up to the exhilarating, rock music sound-tracked Horseware Indoor Eventing championship. Tik Maynard took home the $20,000 prize, but only after a two other riders dismounted in dramatic airborne falls. Eventing is not for the weak heart. 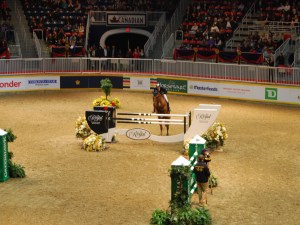 But the crowd soon calmed to golf tournament hush as Canada’s best equestrians entered the ring for the final round of the Greenhawk Canadian Cup jumping championship. After 23 riders attempted the hairpin course, resulting in few clean rounds, the best ten returned for the final round. Unfortunately, Beth Underhill on Viggo (who after the first round the night before was in fourth place) lost a stirrup halfway through her up-to-then clean round; she finished the course, but not in the final ten.It was ‘Captain Canada,’ Ian Millar on Star Power – the man who’s entered ten Olympics – who took home his 11th win in this competition and $100,000. Second was Jaclyn Duff on Paster Noster; third was Elissa Reisman on Vendium. In an interview with PR Newswire after the ride, Millar was asked about the Royal Winter Fair and he said, “I believe the horse brings out the best in people.”

We couldn’t agree more, and this competition apparently brings out the best in him.

The Royal Winter Fair ends on Nov. 15, 2014 with the Weston Canadian Open International Show Jumping event that attracts the best riders from around the world. 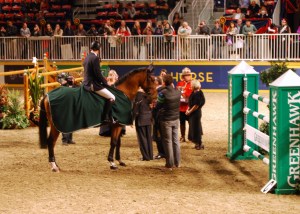 ← Selecting the Perfect Riding Holiday.. advice from Globetrotting.com
North Carolina: Wild, Strong and Free … the horses of the OBX →