I was pulling for Amy Millar. She’s my favourite. (Don’t you have a favourite Canadian Equestrian rider?) After claiming the first round during the Friday night competition, another Royal Agriculture Winter Fair Horse Show win was in sight. 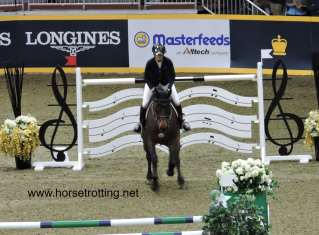 Then the last rail came down. The top pole on the final fence fell during Millar’s round two ride at the Henry Equestrian Canadian Championships on November 3, 2019.

Yes, astride Truman, Amy Millar’s perfect ride was marred by one pole. As the announcer pointed out, a championship win wasn’t out of the picture; she just had to do it the “hard way” – a perfect round in the final six-rider jump off. She did it …

But Beth Underhill riding Count Me In did it seconds better. 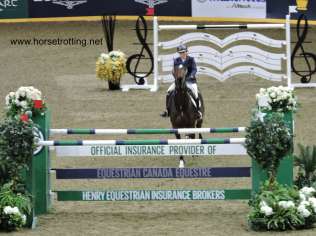 Attending the Royal Winter Fair and Canadian jumping championships is an annual tradition for horsetrotting.net. Since meeting Underhill at the Royal years previous, we haven’t seen her take top spot at this event. Saturday was reason to celebrate.

A somewhat surprise finalist is third place Sam Walker on Coralissa – a seventeen-year-old rider who’s having a great year – pushed several veteran riders, such as 8th place finisher Hyde Moffatt on Gisborne VDL, out of the jump off after three impressive rides Friday and Saturday at the Royal Horse Show. Since icon Ian Millar retired from participating in major jumping events, the door appears to be opening for many younger riders including impressive finishes from both Walker and Lexi Ray on Jewel 8.

However, it also made for some nail-biting moments: several times poles didn’t just come down, but entire jumps crumbled as hooves kicked from above. Three of the 16 riders where eliminated, and two re-jumped combinations after taking down a jump and refusing the third. One horse dramatically reared – twice.

The $100,000 Canadian show jumping championships Round 2 shared the evening with the Horseware Indoor Eventing Challenge (coming up next on horsetrotting.net) and the RCMP Musical Ride – an awesome bridge between my two favourite horse events at Toronto’s Royal Winter Fair, while filling the Exhibition Place arena with Canadian (horse) pride. 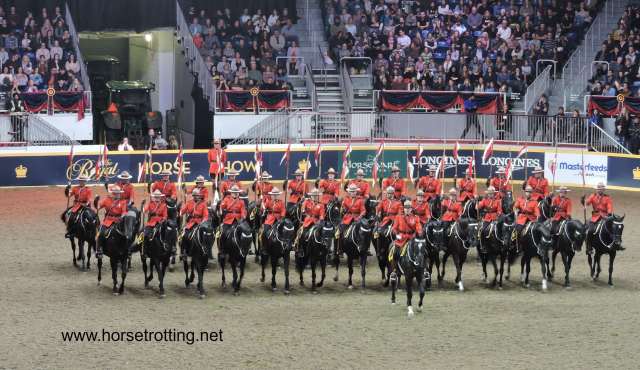