Toronto, Canada is not a city full of rip-off tourist attractions and that’s part of its charm.

Or it was … until the PanAm Games came to town. What a racket – a least that’s how I feel about the Equestrian Games in Caledon, a small town east of Toronto.

Held every four years prior to the Summer Olympics, the PanAm Games is a summer sporting event for a variety of athletes from North and South America. Like the Olympics, cities bid on the opportunity to host, and Toronto has been prepping, hyping and holding up traffic for more than a year to get this done.

Without Europeans competing in equestrian events at the PanAm, U.S. and Canadian riders have an improved chance to medal – they didn’t disappoint.

What did disappoint – in a big way – was the organization, venue, and general execution of the equestrian games, specifically the Eventing Jumping competition I attended on July 19, 2015.

Walking the course – the two-hour pre-entertainment

Basically, everything that could go wrong, did go wrong.

Six months ago, I bought tickets to this very popular event and waited in anticipation. The 10:30am start time on the ticket meant we’d have to leave home at 7:30am. Parking was not at the event; it was recommended spectators be at the parking lot one hour before the games to be shuttled to the event on time. Parking (not at the event) is an extra $10, cash only.

At about 9:10am we followed a snake of cars deeper and deeper into the Albion Hills Conservation area to the ‘parking.’ Then we waited for the ‘shuttles’ to take us to the Caledon Equestrian Park, a much talked about new riding facility poised to bring a continued stream of upper level horsey events to this region …. Well, more on that later.

First, the shuttles were school buses. It was one of the hottest days of the summer to date – 40 Celsius considering humidex. School buses are not air-conditioned, nor are they designed for full-sized adults.

Ok, so we were herded into inadequate ‘shuttles’ for the hot, hot, hot 20-minute drive to the venue – did I mention most people on the bus paid between $50 and $100 for their tickets? 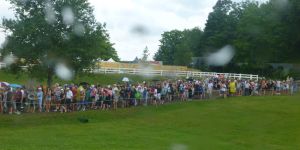 Line up for parking shuttle in pouring rain

Second, the timing: we arrived at the event only to wait in line because the doors weren’t open at 10:00am for a 10:30 event.

Everyone was confused. What was the hold up?

Then PanAm volunteers walking up and down the line up hit us with the kicker: The two-hour competition didn’t actually start until 1:00pm. About 500 people or more had arrived THREE HOURS EARLY. The ticket explanation was extremely confusing, or maybe a ploy.

Five hundred or more people who didn’t have access to their cars now had no choice but to wait. 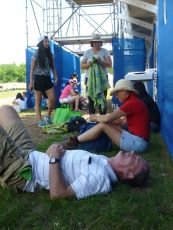 Through the line, through security, and then the entrance – the tickets TicketMaster sent me via email didn’t scan. “You have to go back outside to the ticket both and exchange your tickets,” they guy at the gate told me. “But don’t wait in line, come directly back here.” Well, that didn’t work out smoothly either.

About 500 people, by now closer to 800, were milling around a makeshift ‘equestrian park’ looking for something to do, somewhere to sit in the shade, or something to watch. We’d been promised a two-hour ‘viewing of the horses’ before the event started. That didn’t happen. Instead, it was two-hours of competitors and coaches walking the course.

Few people were sitting in the temporary metal bleachers with absolutely no cover heating up in the direct sun. Most people were lying on the dirt ground huddled in what shade there was discussing their disappointment. One family I met drove four hours to the get here … three hours early.

Food is limited and over-priced. (No surprise). Vendors include a few un-airconditioned trailers of high-priced riding supplies and some food trucks with long line-ups.

What is complete? The two off-limit buildings previously mentioned, a metal horse sculpture, and a big rock at the entrance with the words ‘Caledon Equestrian Park’ engraved in it.

At 1pm, the two-hour competition showcased some amazing jumping and beautiful horses – Canada did well – really well. More on that next post.

The minute the jumping event was over it poured rain. Buckets. Did I mention there was no shelter … at all? Thousands of people lined up in the pouring rain to board school buses back to their cars.

One last word of advice: DO NOT forget to note which of the five parking lots at the conservation site you are in. You will have to get on the right shuttle to get back to your car. We didn’t know this and ended up shuttling – soaking wet – to them all to find our car.

The best part: I get to do it all again – much wiser and much less optimistic – on Tuesday, July 21, 2015 because six months ago I bought tickets to the PanAm jumping preliminaries. (The finals sold out before tickets went on sale to the public.)

Bring on the games … one more time.

To remember this amazing experience, I got a PanAm t-shirt. Check it out here.