Always Dreaming might have won the 143rd Kentucky Derby on Saturday, May 6, 2017 taking home approximately 1.6 million dollars in prize money, but I won too accidentally ending up in Louisville, Kentucky the first two days of Derby Week.

Of course, like millions of others, I was rooting for Patch, a one-eyed horse and this year’s darling of the Derby (also trained by Always Dreaming trainer Todd Pletch). Some accounts claim the eye was lost in a track accident, others state a mystery ailment – either way, Patch wasn’t even supposed to qualify for the Kentucky Derby.

He did. And placed 14th out of 20 to resounding cheers as he finished. (Imagine the movie had he won). Another celebrity, Thunder Snow flown in from Dubai, didn’t finish the race and bucked at the starting gate.

I planned to visit Louisville – that was no accident. I just didn’t realize my early May visit (with the dog) coincided with ‘Derby Week’ – seven days leading up to the Kentucky Derby the first Saturday of every May for almost a century and a half.

Yes, I should have known. But score for me, landing here this week I managed to wedge my way onto an early morning Barns and Backside Van Tour – a one-hour roam trackside and among the 1400 stables housing racers of the week. The tour runs March to November five times daily (for $15 plus museum admission) but Derby Week is extra special (with an extra special price of $50).

From 6 to 10 am every day for two weeks prior to the running of the Kentucky Derby (one of 14 races on Saturday), training riders and trainers practice on the carefully raked silt and sand track of Churchill Downs in preparation for the most exciting ‘two minutes in sports.’

Beautiful horses, trainers, grooms, riders, and owners fill the ‘backside’ area at Churchill Downs every morning before the race along with a van of 10 lucky people (like me) who snagged tickets for the special Barn and Backside Tour organized by the Derby Museum.

The energy is amazing, focus on the horses unwavering and excitement electric. I can’t stop smiling even though I don’t consider myself a track enthusiast. These horses are majestic and the reverse for them palpable.

I have to admit, I don’t know who he is. I have heard of American Pharoah though, and 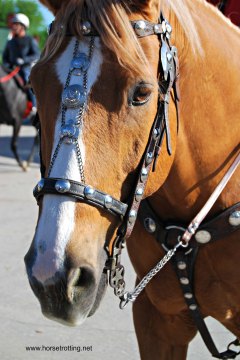 Many others know Baffert though, and he somewhat shyly poses for pictures with fans – most on our tour.

According to our guide, other trainers wouldn’t be so obliging. But that’s life at the track.

For the record, there are no big hats back here. Only big beautiful horses and some western-tacked Quarter Horses belonging to trainers keeping a close watch on the training riders preparing these amazing mounts before the jockeys meet them – often for the first time – at the starting gate of the mile and a quarter-long Kentucky Derby.

Up Next: Inside the Derby Museum and historic walking tour.

What to see in Louisville, Kentucky?

TRAVEL GUIDE: Louisville, Kentucky is a charming downtown with sprawling 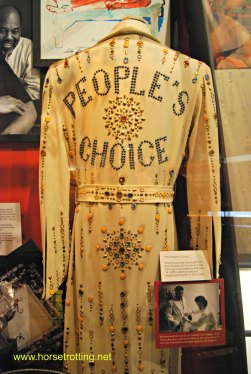 boundaries encompassing a larger range than most visitors first see. However, downtown – including Museum Row – is a walkable area enhanced by a concerted effort to retain the facades of turn-of-the-century buildings as new ones go up behind them.

The Louisville Slugger Museum, production house of the famous baseball bat, is on Main Street between 8th and 9th street.

Anchoring Museum Row on 6th Street is the four-level Muhammad Ali Centre, an extensive tribute to the famous boxer and humanitarian historically contextualized. Highlights include the boxing ring featured in films, his replica Olympic Gold Metal and a robe given to him by Elvis Presley.

Many boutique hotels are capitalizing on Louisville’s revitalized downtown and waterfront, including the pet-friendly Aloft Hotel (affiliate link) with valet parking and hip lobby bar.

Outside of downtown, Churchill Downs Race Track is a draw all year hosting racing April to November including the famous Kentucky Derby the first weekend of May.  The two-level Derby Museum is here, and offers an array of tours including a half-hour, on the half hour, Historic Tour walking tour during museum hours and included with admission.

Note: This post contains affiliate links, meaning if you click on a link above and then make a purchase, horsetrotting.net will receive a small commission with no extra cost to you. Cheers!

← How to Photograph your horse or What we learned at the Can-Am All Breeds Equine Expo Part II
Travel Louisville, KY: Don’t bet? No problem. Churchill Downs still delivers, especially for horse lovers. →